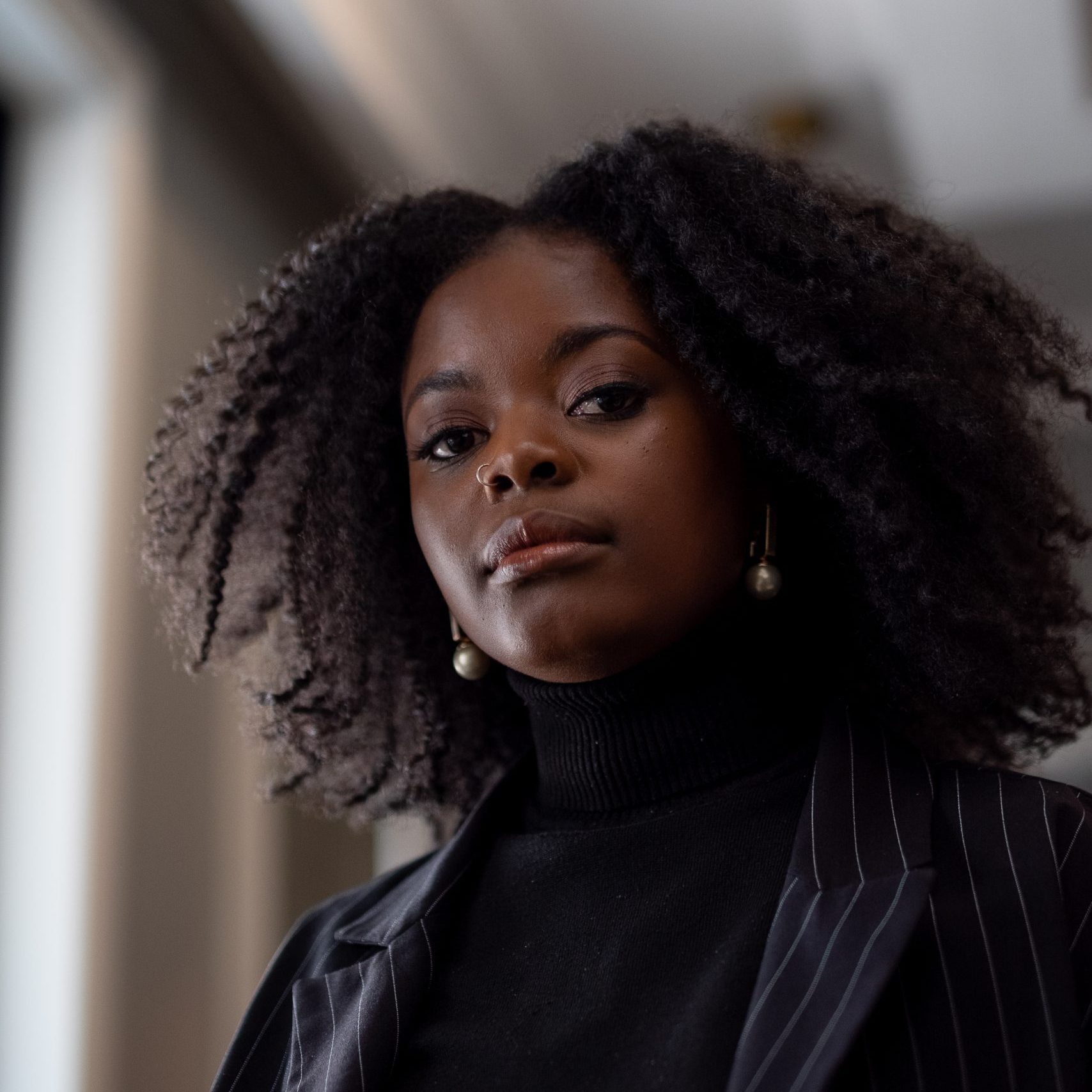 Namafu Amutse is a filmmaker, photographer, art director, and writer from Swakopmund, Namibia. She is currently pursuing a Bachelor of Education Honours degree in English and German at the University of Namibia (UNAM). Her work is fuelled by Southern African tradition, feminism, and Afrofuturism. She also wrote and directed her short film, Mukumo, which premiered in July 2020 at the National Theatre of Namibia. 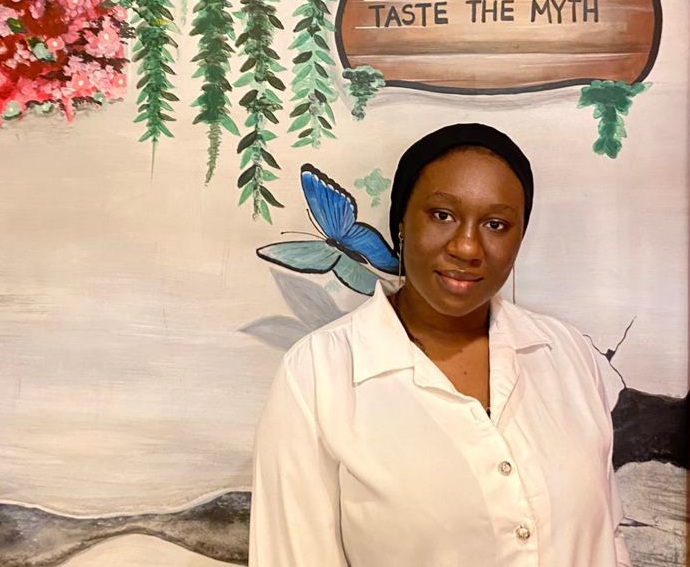 This conversation took place between Nigeria and Namibia, via email.

Aisha: Hello Namafu. Thank you for granting us this interview.

Aisha: I’m looking through your photo series Chrysalis and wondering what must have been your thought process when you were making it. Could you tell me about that?

Namafu: I remember being curious about how the light bounced on the water, the rocks and the material. It felt quite surreal and it was like a breath of fresh air. It was a very calm and welcoming atmosphere. Almost as though the ocean knew exactly what the intention was and acted accordingly. And as I snapped image after image, angle after angle, a story began to unfold, and we got to see that. The light hit perfectly in every frame. And it did look surreal. What went into making it that way? So I pay attention to how the light interacts with the subjects before taking the image. That means making sure that  the subject stands out or gives depth to the landscape and when I find the right angle, then we get these results for both the subject and the landscape. Afterwards in the editing, I can better enhance the crisp details so that it becomes more visible.

Aisha: Was there a process for picking your subject matter?

Namafu: No, not really. Many times when I am conceptualizing, I’m not always sure what the end goal is or what I am trying to say. However, a very important focus for me is to always pay attention to how I capture the subjects around their surroundings. The subject matter was quite personal in the sense that as an artist, I am emerging and molding my craft. And this was one of the main ideas or messages I was trying to convey.

Aisha: What was the message?

Namafu: The message has to do with personal growth and development. It’s about the necessity of introspection and allowing ourselves to become better, to reach our full potential and unveil our purpose. I notice that in the way the subject matter goes from a dark shadow-like figure to one dressed in bright coloured clothes. You say there wasn’t any thought process to your subject matter, how then did you get to what you have in the photo series? Honestly, I think I’m somewhat guided by intuition because I don’t necessarily plan for how  the edits will  come out or for how the story unfolds. But it is the editing process that makes it more apparent to me. The bright images were captured first when the sun was still shining and then the darker images were captured later that day when the sun was setting, hence it made sense to guide the editing process accordingly. What you notice in the images is that the bright images focus on a “bright future” and a new beginning, whereas the darker images then play well into capturing almost the closing of a chapter. And although captured the other way around, they come in full circle because the intention is that the dark led to the light.

“Namibia has breathtaking scenery to offer and one experiences a new image every day when capturing the Swakopmund sunrise or sunset. I’d even go as far as to say the country is magical in its unique way of diverse cultures, landscapes and people.“

Aisha: It does seem that way when you look at it. Let’s deviate a bit from the series and into being shortlisted. When you submitted the series for the prize, what plans did you have for it?

Namafu: So initially I had submitted the images to be published. I had no idea that Doek was working towards the organisation of a literary award. So it was an exciting surprise to find out that my work would be amongst those to be selected for the visual arts category. And then to make it to the shortlist is just such an honour.

Aisha: This must affect how you see your work.

Namafu: Absolutely. The goal is to have the work grow legs of its own and this also reminds me that I am on the track I am working towards. So it is amazing to see how my work is almost like a child finding and creating its place in the world.

Aisha: What would have been your reaction If it wasn’t shortlisted? Or if perhaps it won in the category?

Namafu: I was already so excited just to make the long list. That in itself was already a huge achievement, so I wouldn’t have felt demotivated or demoralised had I not made it to the shortlist. I believe that what is for you will find you, as long as you put in the necessary work and the timing aligns. As for my reaction to possibly winning in the category, I would absolutely be honoured. That’s the best word I can use to describe how I’d have felt.

Aisha: Coming back to the photo series. Did you in any way intend for it to be political?

Namafu: It’s easy to see how it could be about black masculinity. The subject matter goes from dark and menacing to softer and shrouded with colourful clothes, looking softer. Yeah exactly. It’s possible that I was unconsciously hinting at the topic.

Aisha: Looking at how this series reflects more than the personal, do you think it represented Namibia in any way?

Namafu: To put it very briefly, Namibia is represented in the landscape, in the identity of the young boys photographed, as well as my own.

Aisha: Could you elaborate on that? For instance, if you would want to describe Namibia using this piece how would you explain it to the person wanting to know?

Namafu: Namibia has breathtaking scenery to offer and one experiences a new image every day when capturing the Swakopmund sunrise or sunset. I’d even go as far as to say the country is magical in its unique way of diverse cultures, landscapes and people.

Namafu: If you mean visually, then yes. When I was creating this series, I was not sure of what the outcome of the subject matter would be. Many times I only figure this out in the editing process, almost like the images begin to speak to me. So yes, if I had the subject matter from the get-go, I think I would then have been more specific with what I was trying to capture, but in this particular experience, I simply allowed the light, the boys and the environment to guide the perspective and the idea around what the final subject matter would possibly be. I like to have a level of curiosity to where my work is leading me and somehow it comes together in the end. I hope that made sense, unless I misunderstood the question then do let me know.

Aisha: Did your filmmaking experience influence you in any way?

Namafu: In the creation of this series, no. I was fully immersed in capturing still images that focused on telling the story in its stillness and so at that moment, the film kind of drifted off to the side for a while.

Aisha: Oh, what would you say influenced the process then?

Namafu: It was very much influenced by gut and feeling. There is an overwhelming level of curiosity when I create, so things just come together at the moment. I did not plan for this particular shoot. I remember I was at home, bored and so I grabbed some material and items and asked my siblings if they were up for a quick photoshoot. With that said, much of my work is spontaneous in that sense and so the idea of influence and intention only comes afterwards.

Aisha: What would you like people to see in your work? Especially this series?

Namafu: When people look at Chrysalis, I want them to see growth and shift. I want them to recognise the shift of the individuals in the images and somehow relate that to their personal growth and transformation.

Aisha: That’s beautiful. What have you learned from shooting the series?

Namafu: I’ve learned that sometimes one doesn’t have to have a concept figured out. That sometimes you just have to create blindly and allow yourself to be guided and inspired in the moment of creation. In addition to that, although as artists  we want our work to carry an impact, once we share it with the world, other people can see what they choose to see and we cannot control that. However, this is also the beauty of art.

Aisha: Yes, but what if somehow the process said that of filmmaking, would it still be the same for you?

Namafu: Yes, absolutely. If I had decided to make a short film for this particular series, I would have simply allowed myself to create by creating.

Aisha: How has making this series changed you?

Namafu: This series has taught me to trust my intuition and in a way, it has helped to strengthen it as well. It has also caused a shift in my work, in the sense that I saw the growth it encompassed compared to my previous work. Other than that, I don’t think I underwent any major changes in my thoughts or being.

Aisha: Should we look forward to seeing more photo series from you In the future?

Namafu: Absolutely (smiles). I am just getting started.

Aisha: Thank you so much for talking to me, Namafu.

Namafu: Thank you so much for the interview. I loved that they were not the standard questions folks usually ask. You challenged my thoughts and I love that.

Aisha Kabiru Mohammed is a law student at Ahmadu Bello University, Zaria. Kaduna state is her home town. Aisha is a poet, essayist, and fiction writer. Her pieces revolve around identity, feminism, and the African mind and body as political and spiritual entities. In 2019, Aisha won the inaugural Andrew Nok Poetry Prize, awarded by YELF. She later judged the 2020 edition of the prize. When she isn’t studying law and writing, you can find her drinking tea, reading, stroking cats and volunteering to spread mental health awareness and to end SGBV. Aisha currently hosts a podcast segment for Ayamba LitCast called Poet Box Series. 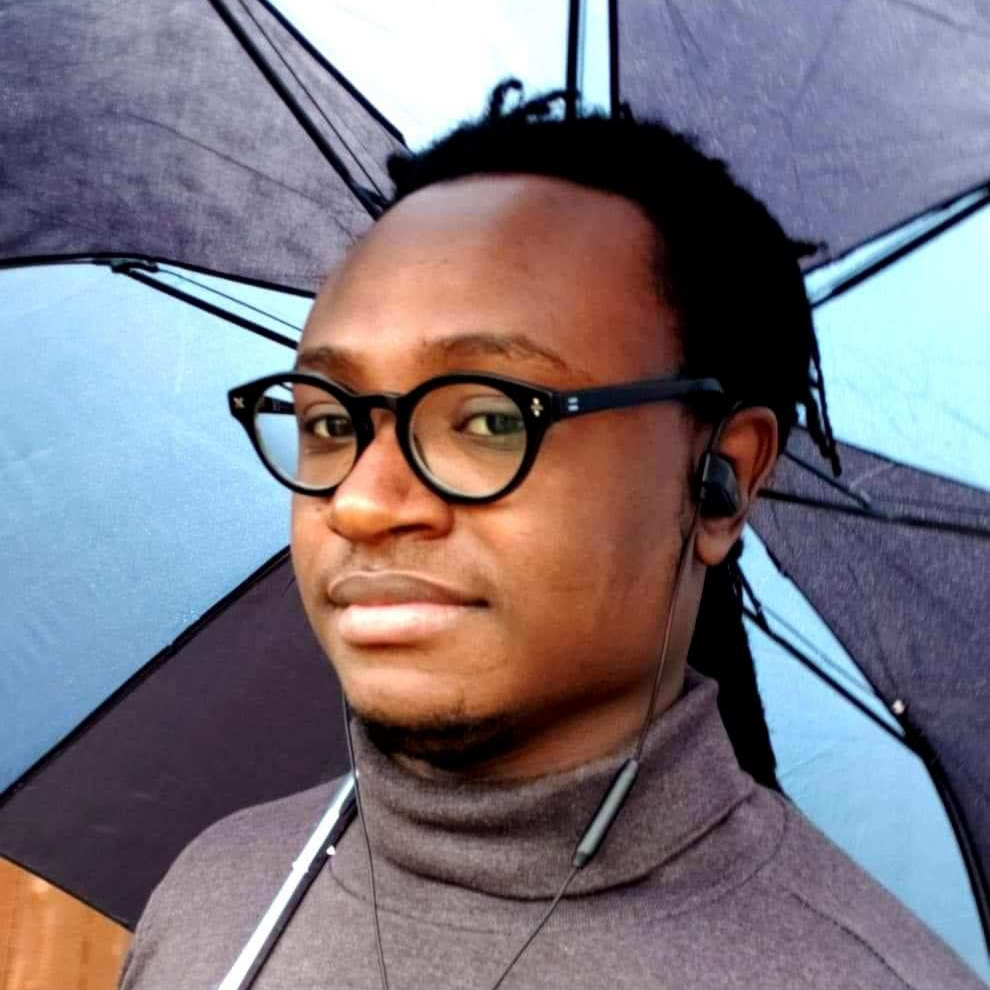 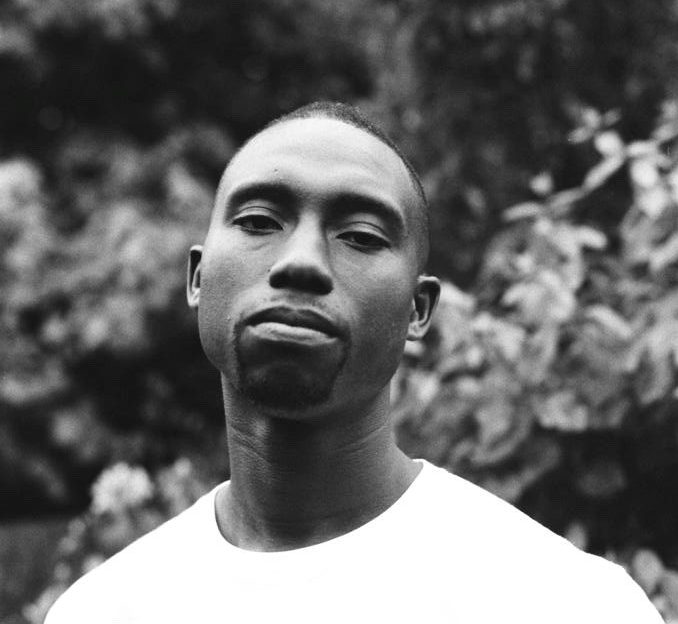 The Art of Dismantling Life: A Dialogue with Sabah Carrim