Tania Haberland (formerly van Schalkwyk) is a pussy- and cock-loving poet, artist and body-worker. She won the Ingrid Jonker Prize for poetry in 2010 and is co-creator of a healing practice called Oceanic Somatics. Whether working with people or writing or creating, she is interested in ecstatic living.

This conversation took place in a green bedroom in the cold sweetspot of  Gaborone, Botswana and a beige bedroom in the sweltering hotspot of Milan, Italy by Call.

Gaamangwe: Congratulations for being shortlisted for the Gerald Kraak award. What did it mean for you to be shortlisted?

Tania: I was really happy and honored because of it being based around sexual freedom, human and gender rights in Africa. These issues are really important to me as a writer and  in my personal and professional life. I often work and play around the issues of sexuality and gender. Apart from being nominated,  I am happy that there is such an award. I am happy that there are people and organizations  creating space and dialogues around this subject.

Gaamangwe. Absolutely. Reading this anthology was such a jarring experience. I didn’t know we needed this kind of work  until now because it is so important. Sometimes we get so comfortable in the world and we don’t realize the importance of every single narrative concerning human rights.

Tania: Yes, I think that in today’s world, there is sort of a weird dichotomy between supposed sexual openness and freedom but a lot of the time we are completely closed. You find that the dialogues and the  images that we are bombarded with on a daily basis are commercialised versions of our sexuality, and are socially constrained ones about what is appropriate and inappropriate. And even though it may seem more free than before, in a way it’s another form of  indoctrination. So when we hear alternative and different narratives like this, we open up. So instead of just freedom it’s also about honesty and truth.

Gaamangwe: That is my exact sentiments. Sometimes our commercialized world can make us feel like we are talking about sexuality but most of the time  we are only scratching the surface, in terms of how broad and dynamics  sexuality is. We need to start having more dialogues that are that broad and inclusive, because most of the ones we are having are feeding and strengthening the current, limiting narratives and stereotypes of sexuality.

Tania: Yes, as a writer who is interested in narratives and stories, I know that the narratives we live by will  influence our lives. The stories we tell about ourselves become our lives. For example, three simple words; apple, woman, snake  is one of the biggest narratives we have. As soon as I  hear these words, this whole concept comes up. So I am interested in playing with those concepts and transforming them.

Gaamangwe: That is powerful. You did this with your poem. What concepts were you trying to explore with the poem you submitted for this award?

Tania: Well, the ocean for me is a huge muse and I wrote this poem at a time when I was just beginning my second collection, which is called “Other”. I actually started in a physical way, because I work a lot with the senses. So at the time, I was going to the ocean everyday, swimming. And it was really cold for me because I had spent most of my life in Mauritian and Arabian waters so I am used to warm water. So I began to feel how other this water was, how cold it was and learning to embrace and allow it to be and to become one with it. The water became my muse and I started seeing it as a male entity and I began writing a series of poems about water and the male muse, connecting myths around male sea gods with the fact that  we are 70 to 80 percent water and that there are all these bodies of water around the planet: seas, oceans, lakes, rivers…so planet earth  is also 70 to 80  percent water. So I started thinking about that together and trying to see the world as  other, a beloved stranger as opposed to a narcissistic reflection of myself. So that was some of the concept behind it. It was inspired by a quote from Pascale in a book  by Gaston Bachelard called The Poetics of Space.

I was interested in how the shell is often hard, beautiful not pretty painful to create but such an object of delight, and how the mollusk within is  like the clitoris, which is often unseen. I wanted to honor that.

Also it was a moment when I was going through a difficult time , a violent divorce and so when I was there, working and writing, it became an awakening and letting go of a time that was very deadly, or perhaps deathly in the sense of not having been able to express myself sexually ( and therefore not being fully alive) and also of having been in physical danger.

Gaamangwe: That is powerful. I am thinking about how yes, the clitoris is unseen, neglected and rarely brought up in conversations of sexuality with our partners,  and even with ourselves. But the clitoris is this vast  and untapped thing, like the ocean. What could we learn about bodies, sexuality and ourselves if we did explore more dialogues about the clitoris?

Tania: From a personal perspective and from the works I have read, I find that for a while there was a social denigration of the clitoris, I mean it was not being considered at all right? Then there was the denial of the clitoris in the name of the G-spot and the idea that it was in a way a midget penis  or something like that. (when in fact the clitoris and g spot etc are all part of the same interconnected organ of pleasure, there is no real separation) So there are all these perspectives that don’t allow for a broader and more imaginative way of experiencing it. I am also thinking that the evolution of the human being has a lot to do with the clitoris, in the sense that the female human is one of the only animals that when she has sex and an orgasm, it’s not only for procreation. When the woman orgasms, it doesn’t always have to do with the procreation process, while for the man every ejaculation there is a possibility of creating life.  So the clitoris is there truly for pleasure and not just procreation. So that is a powerful thing to realise  because we  live in an oxymoronic society where hedonism is both ostracized  and over-identified with at the same time.So the fact that the clitoris is an instrument of pleasure, that its function goes beyond just procreation is powerful and beautiful. It is not just there, it is useful in its application to useless pleasure in the face of a society dedicated to work, etc.

Gaamangwe: That is an important perspective, especially when we look at the disheartening realities of Female Genital Mutilation, where the clitoris has been used as a powerful tool to restrict female pleasure in some parts of Africa and the world.

Pleasure is an aphrodisiac and we all need to experience it. The clitoris is as vast, as feared and unknown as the ocean. The way that we engage with it is like the way someone who doesn’t know how to swim engages with the ocean.

Tania: Yeah. I like that. I think we have to own our pleasure, speak and write about it from our own perspective and not from what we think people want to hear or what we should be saying. Because we are extremely influenced by the society we live in, so we have to speak about our experiences. Sometimes I wonder, is what I experience actually my experience or what I was told to experience? So we have to speak and write about what feels more authentic inside our bodies, so that we can start to understand our own sexuality as women.

Gaamangwe: It is important to re-write the narratives that existing about our bodies and sexuality, mostly because half of the times, these narratives are not written or created by us. Tania,  Thank you so much for your writing, and for this poem. 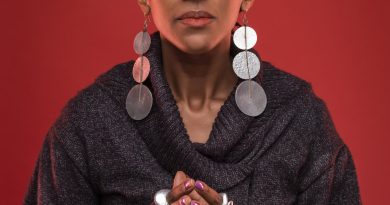 Our Everyday African Lives: A Dialogue With Stanley Gazemba

Art As A Political Critique: A Dialogue With Yaw Owusu

Erotica By An African Author: A Dialogue With Lusi Mbira

Coincidental Themes and Intrinsic Patterns Leading To Signatures in Film: A Dialogue With Ts’episo Mahase